Farm Hack, in partnership with Chris Callahan from UVM and with funding from USDA NE-SARE have recently completed an overhaul of their tool pages.  This work was part of a project aimed at delivering an improved collective innovation, distribution & education, and impact assessment platform for sustainable farm and food innovations such as those accomplished in SARE projects.Shiny New Tool Library at Farmhack.org
As we approach the completion of our SARE project implementation, we have conducted surveys of past SARE PI’s and have just launched a re-designed Tools section of the website. The new version is intended to make both documenting tools and finding the tool you are looking for easier and more effective.

We’ll be hosting a community webinar on two dates to provide a live walk-through of the new Tools Section to help familiarize users with the new features and get your feedback.  We hope you can join us for one of them.  These webinars are free.  No registration is required.  There will be time for Q&A.  The sessions will be recorded and posted on Farm Hack.

As you might remember, Farm Hack in partnership with Chris Callahan, Agricultural Engineer at University of Vermont, received a SARE grant in summer of 2015 to improve the Farm Hack platform for all users, and specifically for the documentation of SARE-funded tool ideas. Hundreds of really interesting design ideas are funded and documented on the SARE (Sustainable Agriculture Research and Education) website each year, but the lengthy and somewhat hard to navigate pdf database does not facilitate sharing of designs very easily. That’s where the Farm Hack platform came in!

To upgrade the Farm Hack website, we surveyed SARE principal investigators as well as Farm Hack users to glean insight into what features we should improve to add on. In partnership with our software engineer partners we focused on making our growing tool database more easily searchable, and put a lot of work into the tool documentation page to make the process easier and more accessible, and make the resulting tool page more searchable and useful to community members. We also added an “ask an admin” pop up feature to encourage questions and feedback.

We are very excited about this next iteration of the Farm Hack platform, and hope it helps move our community towards further sharing and collaboration of useful, well-designed open source farm technology and tools.

We want your two cents on the site updates! Feel free to leave a comment on this blog post to start the conversation.

Farm Hack and Chris Callahan, Agricultural Engineer at University of Vermont, have partnered up for a SARE (Sustainable Agriculture Research and Education) project that will leverage the Farm Hack documentation platform to better document and disseminate SARE-funded innovations, while concurrently improving the platform for all Farm Hack users. 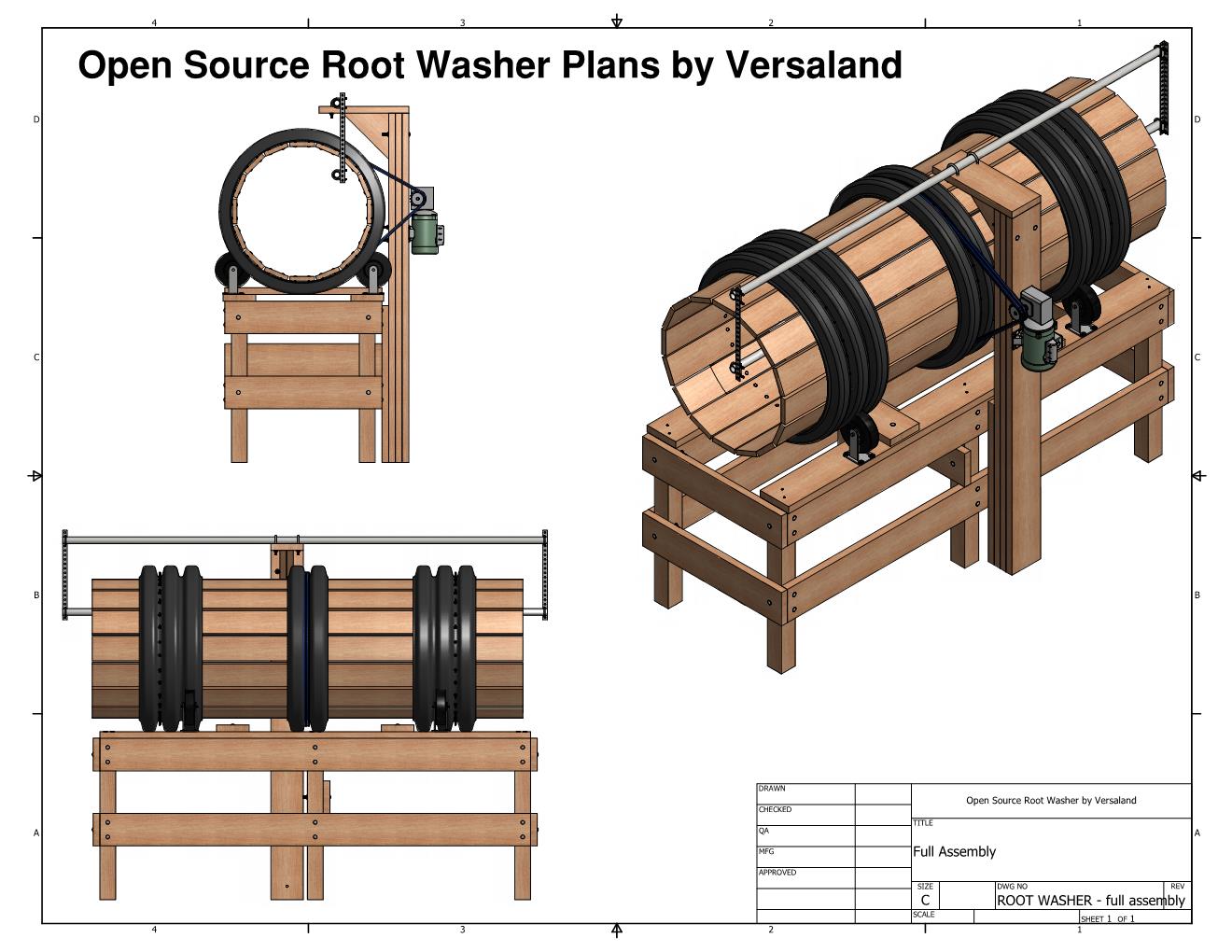 Hundreds of really interesting SARE tool innovation projects are funded each year and documented on the SARE website – for example, a no-weld root washer, mobile hops harvester or a waste vegetable oil powered flame weeder. However, the format of this documentation in a very lengthy pdf database does not facilitate  easy dissemination of these valuable ideas to other farmers.  The grant we have received will allow us to engage the SARE grantee community to discover how the Farm Hack platform can be improved to better fit their needs as a documentation platform, and fund development to make these changes.

With over 200,000 unique visitors since 2012, 2,000 registered contributors and 159 documented projects, Farm Hack already offers a visible documentation platform that additionally permits continued collaborative improvement of tools through open-source, wiki-style documentation and discussion forums. By adding improved functionality on FarmHack.org such as metrics on tool views and downloads, discussion forums, and impact story capture, this project will provide a platform for enhanced SARE project distribution, collective innovation and iterative enhancement, and evaluation of impact over a longer period than the traditional project life. We hope to provide a perpetual home for SARE project outputs that will allow them to live, grow and improve in alignment with the open source philosophy shared by farmers, Farm Hack, SARE and other funding programs.

This will be a two-year project culminating in late 2016, and we are currently in the stakeholder engagement and needs assessment stage. Stay tuned for future updates on the project, and work being done to improve the platform.

I have run my own farm for eight years, but because I have always farmed rented land, I have never lived within two miles of any of my greenhouses.  That means that I have had a lot of restless nights, wondering if my seedlings were alright.  Fortunately, a few collaborators and I recently received a grant that will help us to develop to new tool to solve this problem.

Over the next few months, I will use the Farm Hack blog to document our progress as we brainstorm, prototype, test and tweak the tool that we have come up with.

CSA vegetable farmers like me have a lot at stake in our seedling greenhouses–  tens of thousands of plants, which we depend on for a productive season.  If it gets too hot, or too cold, a die-off in the greenhouse can have a devastating impact on the farm’s bottom line.  I can’t count the number of times that I have driven several miles from my home to my greenhouse just to check the temperature,  sometimes at 1am on a cold night, or at 1pm on a hot afternoon.  95 percent of the time, everything is fine:  the heater is fired up and keeping things warm;  or the fans on thermostats are working properly and venting out the heat.  A waste of a trip, except that without going to check on the seedlings, I probably wouldn’t have been able to fall back asleep.

There are alarms that farmers can buy and install in their greenhouses to monitor temperature.  Some of them just sound a siren if things get too hot or cold.  Others hook into a land line, or an internet connection, to call a farmer with a temperature alert.  None of those were going to work for me, since  my greenhouses aren’t near a land line or an internet connection,  and they are miles away from earshot.  This situation is common to a lot of young farmers who are growing on leased land.

An idea for a solution

At Farm Hack New Hampshire last fall, we had a working group on “smart farm” tools.  We were lucky to have both farmers in the group, as well as some allies with skills in open source software and hardware development.  I joined the group to discuss how farmers might use sensors, open-source circuit boards, and computer code to create DIY tools that could make our farms more efficient and more sustainable.  We threw around lots of ideas, some crazier than others.  One project that seemed straightforward and useful was creating a farm-built greenhouse monitor that could deal with any problems that might come up.  We knew that the possibilities for this were wide open:  it could monitor soil moisture and turn on sprinklers, or temperature and send turn on fans, all while collecting data that could allow the user to monitor the temperature trends in the greenhouse over the day.

We wanted to make the first attempt at this tool simple and useful, so we decided to tackle the problem outlined above.  We wanted a greenhouse monitor, built from easily accessible parts by a farmer without major electronics skills, that would send a SMS text message to a farmer if there was an “alert” situation in the greenhouse, or that would just send regular status messages about the state of the greenhouse.  We decided we’d also like to make the communication two-way, so that the farmer could text the greenhouse and get a response with the current temperature.  We knew that many farmers didn’t have a landline or internet access at their greenhouses, so we wanted our tool to operate using cellular networks to communicate.  And it would have to be cheap enough to appeal to cheapskate farmers!

Applying for a grant

A subset of our team set out to apply for a grant to fund the development of this tool so we could build it, document it, and share it with the farmer community at large.  RJ and Louis (open-source computer programmers and hardware developers) joined up with me (Ben, vegetable farmer) to apply for a USDA Sustainable Agriculture Research and Education (“SARE”) Farmer grant, which funds farmers to carry out research and share it with other farmers.

We just learned this week that we got the grant!  So we are excited to spend a chunk of time this spring putting together a prototype of this tool, getting some other farmers to test it, and documenting the whole process to share with the world.  This is the first step, and you can keep tabs on the project as we go forward right here at Farm Hack.